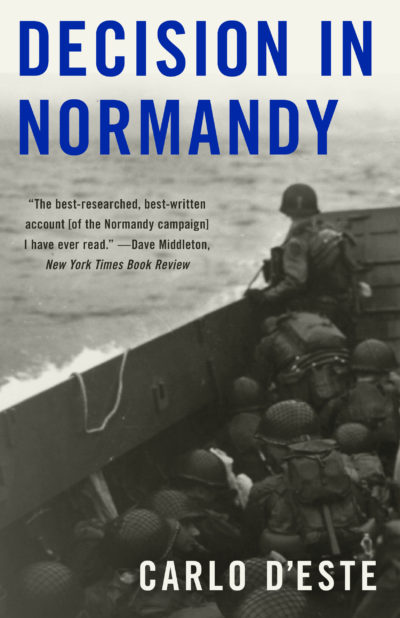 “The best-researched, best-written account [of the Normandy Campaign] I have ever read.”—Drew Middleton, The New York Times Book Review

One of the most controversial and dangerous military operations in the history of modern warfare, the battle for Normandy took over two years of planning from each country that made up the Allied forces. Mired to this day in myth and misconception, untangling the web of work that led to D-Day is nearly as daunting as the work that led to the day itself.

Drawing from declassified documents, personal interviews, diaries, and more, Carlo D’Este uncovers what really happened in Normandy. From what went right to what went wrong, D’Este takes readers on a journey from the very first moment Prime Minister Churchill considered an invasion through France to the last battles of World War II.

Loaded with photos, maps, and first-hand accounts, readers can trace the incredible road to victory and the intricate battles in-between. A comprehensive look into the military strategy surrounding the second World War, Decision in Normandy is an absolute essential for history buffs.
D’Este, Carlo

Carlo D'Este is a military historian, biographer, lecturer, consultant and book reviewer for the New York Times, Washington Post and other publications. His books include Decision in Normandy (1983); Bitter Victory: 'The Battle for Sicily,...