Michael Bisping was raised in Lancashire, England, and began martial arts training when he was eight years old. He became the newest member of Ultimate Fighting Championship HOF in 2004 at the age of twenty-five. In 2016, he became the first and, to date, only Briton to win the UFC middleweight title. After retiring from MMA in 2018, he has remained active in the community by serving as color analyst and hosting the UFC podcast, Believe You Me. Michael lives in Anaheim, California with his wife and three children. 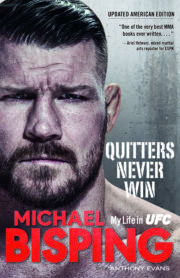