Ripken began his playing career with the Baltimore Orioles in 1987 under the direction of his father, Cal Ripken, Sr., and alongside his legendary brother, Cal Ripken, Jr. This marked the first and only time in Major League Baseball history that a father simultaneously managed two of his sons. After playing for Baltimore through 1992 and again in 1996, Ripken played for the Texas Rangers (1993-1994 and 1997), Cleveland Indians (1995), and Detroit Tigers (1998). In 1988, Ripken finished second among American League second basemen in double plays turned with 110 and his .9927 fielding percentage in 1992 led all Major League second baseman that season. Ripken led the Orioles in hitting with a .291 average and was tied for first on the team with 28 doubles in 1990.

In the spring of 2002, Ripken was honored for his achievements with an induction into the Maryland Sports Hall of Fame.

In 2001 Bill and Cal Ripken established The Cal Ripken, Sr. Foundation, in memory of the family’s patriarch. The foundation is a 501(c)(3) non-profit organization, working throughout the country with Boys & Girls Clubs, P.A.L. centers, inner-city schools, and other youth serving organizations supporting programs in America’s most distressed communities.

Bill is also a bestselling author and sought after public speaker. In 2005, he and his brother co-authored Play Baseball The Ripken Way: A Complete Illustrated Guide to the Fundamentals. 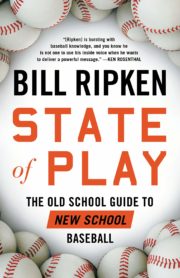