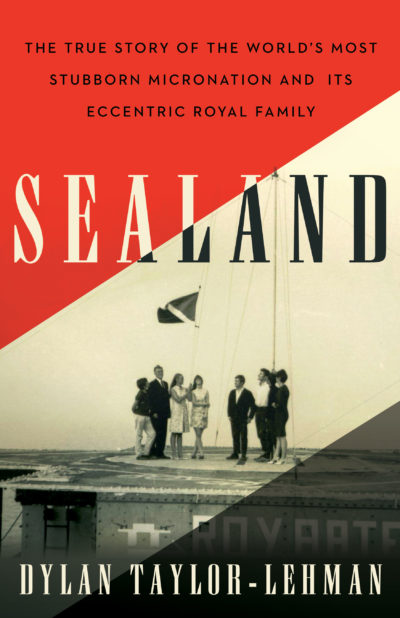 The saga of Sealand, the world’s smallest rebel nation, is a swashbuckling tale of international intrigue, armed battles, and Swingin’ Sixties radio pirates over a fifty-year span of self-proclaimed sovereignty.

In 1967, retired army major and self-made millionaire Paddy Roy Bates cemented his family’s place in the history books when he inaugurated himself King of the Principality of Sealand, dwarf-sized dominion of the high seas. And so began the peculiar story of the world’s most stubborn micronation on a World War II anti-aircraft gun platform off the coast of England.

Sealand is the raucous tale of how a rogue, larger-than-life adventurer seized the disused Maunsell Sea Fort from a group of pirate radio broadcasters, settled his eccentric family on it, and defended their tiny kingdom from UK government officials and armed mercenaries for half a century. Incorporating original interviews with surviving members of the principality’s royal family, Dylan Taylor-Lehman recounts the riveting battles and schemes as Paddy and his crew engaged with diplomats, entertained illegal pirate radio and TV broadcasting, and even thwarted an attempted coup that saw the Prince Regent taken hostage. Incredibly, more than fifty years later, the self-proclaimed independent nation still stands—replete with its own constitution, national flag and anthem, currency, and passports—and offers the esteemed titles of “Lord” or “Lady” to its loyal patrons.

Complete with rare, vintage photographs of the Bates clan and their unusual enterprises, this definitive, stranger-than-fiction account of a dissident family and their outrageous attempt to build a sovereign kingdom on an isolated platform in shark-infested waters is the stuff of legend.

Dylan Taylor-Lehman is a nonfiction writer from Ohio who recently relocated to the endless xenoscape of western Texas. Previously a reporter for the award-winning Yellow Springs News, his work has also been published in Gastro Obscura, The...