Although born in Waukegan, Illinois (same as literary icon Ray Bradbury), Sam A.

Although born in Waukegan, Illinois (same as literary icon Ray Bradbury), Sam A. Patel grew up in New Jersey.  An avid collector of comic books and roll-playing games, he first joined the internet at the age of 14 when he ran a BBS on his Commodore 64 with a 300 baud modem.  Later, he earned a Bachelor of Arts in English from the University of Miami, and a Master of Arts in Philosophy from New York University.  In the time since, he has stress-tested data centers for the national election, taught English in Japan, managed email servers in Portland, Oregon, and built exhibition booths in Melbourne, Australia.  Data Runner is his first series. 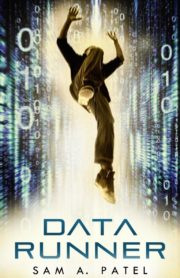