Melody Thomas Scott is best known for her Emmy-nominated work in the iconic role of Nikki Reed, a character she’s played for forty years and counting on America’s number one-daytime television drama The Young and the Restless. She’s also appeared on Family Feud, The $25,000 Pyramid, and Match Game, and is known for her charitable efforts with ATAS TV Cares and Save the Earth Foundation. Melody lives with her husband and beloved dachshunds in Beverly Hills, California. 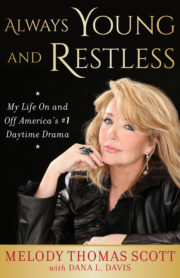