John Eisenberg has been a sports journalist for more than 30 years. The author of eight books, he worked for major newspapers from 1979 until 2007, including five years with the Dallas Times Herald. Eisenberg has won more than 20 writing awards, including several first-places in the prestigious Associated Press Sports Editors contest. A native of Dallas and graduate of the University of Pennsylvania, he is now the columnist at baltimoreravens.com. He lives in Baltimore with his wife, Mary Wynne. 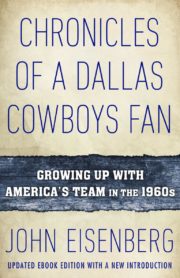